Following a jump in bond yields last week, lenders across the country once again bumped up their fixed mortgage rates.

Big banks like RBC, TD and BMO hiked 5-year fixed rates by 20 to 25 basis points, with all three offering uninsured rates at 4.39%.

The move follows a nearly 10-bps jump in the Government of Canada 5-year bond yield, which leads 5-year fixed rates. The 5-year bond yield closed at an 11-year high of 2.88% on Friday. Since the beginning of the year, bond yields are up over 165 bps. 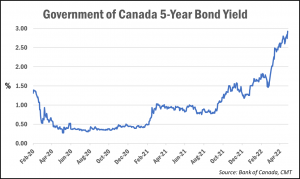 That means fixed rates are now up roughly 40 bps in just the span of one month. For perspective, a 50-bps rate increase translates into a roughly $25 higher monthly payment per $100,000 of debt, based on a 25-year amortization.

As fixed rates march higher, variable rates are likely to jump again following the Bank of Canada’s next rate decision meeting on June 1, when it’s expected to hike interest rates another 50 bps. That could bring prime rate—the rate upon which variable rate mortgages and lines of credit are priced—up to 3.70%.

Aside from higher monthly payments, how will mortgage borrowers be impacted by these rising rates?

“As interest rates march higher—we expect the overnight rate to hit 2% by October, a projection that increasingly looks conservative—borrowing costs for Canadians will also rise, leaving the average Canadian household to spend almost $2,000 more in debt payments in 2023,” say economists from RBC Economics.

“This will erode spending power, especially for the lowest earning fifth of households which spend 22% of their after-tax income on debt servicing (including mortgage principal and interest payments),” they add.

On the other hand, RBC notes that the pandemic helped boost savings among Canadian households.

“The pandemic may have boosted debt, but it also left Canadian households sitting on $300 billion in savings,” the RBC economists wrote. “That’s a huge backstop—enough to cover about a year and a half of total Canadian household debt payments.”

While the latest housing data showed home sales plummeting in April, house prices have so far held steady throughout most of the country outside of Ontario. In the Greater Toronto Area, average prices are so far down roughly 6%, but by as much as 22% depending on the housing type and specific region. Benchmark prices are often a lagging indicator, so further price declines are likely in the months ahead.

“…tomorrow’s homebuyers are going to have a much harder time paying today’s prices if they’re paying 5% on their mortgage compared to the low 2% range just a few months ago, and the high 1% range a year ago,” wrote real estate analyst John Pasalis, president of Realosophy Realty, in a recent post on move smartly.

Pasalis noted some have argued that this isn’t a concern, since many borrowers have been qualifying at a stress test rate of at least 5.25%, but he suggests that’s an oversimplification of the situation.

The mortgage stress test is currently used to qualify borrowers at the greater of the buyer’s actual mortgage rate plus 2% or the benchmark rate, which is currently 5.25%.

“As these are dynamic measures that will change as rates do, the stress test will also increase, which will reduce the amount of debt a buyer can take on,” Pasalis writes, adding that the contract rate influences how much mortgage debt the borrower is willing to take on.

“A buyer who qualifies for a $1M mortgage may be willing to take on that much debt when interest rates are 1.75%, but less so when rates are 4%, because under the higher rate their actual mortgage payment would be roughly $1,100 per month higher,” he wrote.

As a result, if interest rates continue to trend higher, Pasalis says he “would not be surprised if we see some downward pressure on home prices over the next 9 to 18 months due to homebuyers being unwilling or unable to pay today’s prices at tomorrow’s higher interest rates.”

Although, he adds that any price decline would “likely be a temporary one due to long-term fundamental factors that have been contributing to rising home prices in the Toronto area.”

The MPC and MPC Foundation Boards of Directors have carefully selected two established charitable organizations for their outstanding efforts to provide much needed medicine, supplies, and shelter to vulnerable individuals coping with hardship in Ukraine.

With the urgency facing the people of Ukraine, we ask that mortgage professionals donate generously to this joint initiative to provide humanitarian relief through: The Canadian Red Cross, and Doctors Without Borders/ Médecins Sans Frontières (MSF). Funds will be collected by the MPC Foundation and distributed evenly between these two very capable organizations, each of which will provide support directly to those most impacted.

Mortgage Professionals Canada has already donated $10,000 to support this initiative.

We thrive off of your continued support and client referrals. Let us reward you for helping us get our name out into the community! Please mention who referred you or how you heard from us, when filling out your mortgage application. The name you give us will also be entered into the same draw for coming in to see us!

HOW SOME YOUNG PEOPLE CAN AFFORD A HOME
Scroll to top